Galera Streaming Replication: Too Big A Bite Can Choke Your Cluster
Read more...

Why Did We Start Working on Streaming Replication

I was in a harbor waiting for a ferry, when I suddenly got pulled into a support request to troubleshoot a stalling cluster. Talking with the DBA it soon turned out that his cluster was executing a background batch job for maintenance. This maintenance job executed a big number of data changes at a low pace in a single transaction. The cluster hang started soon after the batch job had committed in the first node. The hang was caused by this one big transaction taking a long time to apply in secondary nodes. The cluster was apparently choking for a too big bite.

The DBA was eager to start killing potentially harmful connections, but in a cluster, this is hardly ever a good idea, and especially in this situation would not be even effective. Our options were to shutdown all but the first node, and join nodes back, one by one by State Snapshot Transfer (SST), or alternatively we could just wait. Based on the information of the maintenance transaction, the expected downtime by waiting was possible to tolerate. The customer problem was solved, by waiting, but the total toll was 27 minutes of cluster stalling. When I boarded the ferry, it was obvious that something must be done to prevent large transactions choking clusters.

Metrics on the Problem

After the trip, and back to my laboratory, I started simulating the problem seen on the customer site. And I finally came up with a test scenario simulating the turbulence caused by a large transaction in a cluster. In the scenario, the cluster is processing a constant flow of well behaving small transactions, which should saturate the transaction through-put rate at a stable level. And then we enter a large transaction to execute in the first node and monitor how long it takes to operate in the first node and what happens after the replication.

But enough talking, see for yourself what happens when a large transaction hits the first node in the cluster. In this exercise a two node cluster is installed on my laptop, which has also background media apps running to keep the field engineer entertained for otherwise monotonic benchmarking work ahead. So this is not a perfect deployment for stability, and metrics show some fluctuation, but overall, the impact of large transaction for transaction throughput is clearly visible from the metrics recorded.

There is also a separate table with 2.5M rows, and to simulate a large transaction, the benchmark launches a single update statement to update all the rows in the big table. Running the large update, alone in an idle cluster takes ~20 secs.

Here is a visualization, of what happens when the large update is submitted to the cluster while having to simultaneously process the payload. 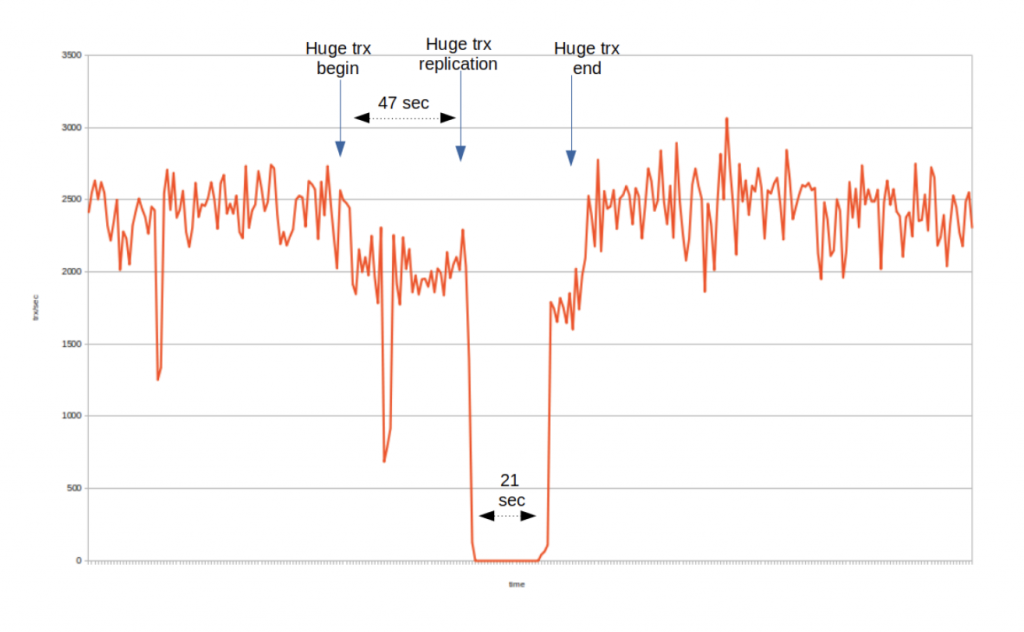 A quick reminder though: the Galera replication library could be configured to allow out of order committing, by variable: repl.commit_order. But for data safety, this should never be done. Data safety is the first and foremost requirement for a database cluster, after all.

In the chart the “Huge trx end” mark shows when the large transaction was finally committed in the secondary node, and the cluster returns to normal payload transaction processing state. Transaction throughput saturates back to 2.3K trx/sec rate.

The problem of cluster choking under large transactions was anticipated very early during the development of Galera, many years back. Protecting the cluster from the effect of large transactions was one design goal, and for this two approaches were developed. With wsrep_max_ws_size variable, a cluster can be configured to reject too big transactions. This variable is enforced in MySQL/MariaDB server side, where the size of accumulating replication events (a.k.a binlog events) is monitored and if wsrep_max_ws_size limit is exceeded, the transaction will abort with a warning. This is an effective method for protecting the cluster, but is a rather rude way to do it. The large transaction is allowed to proceed up to the transaction size limit, and is then rolled back This means a lot of wasted resources and nothing got done after all. The default value for wsrep_max_ws_size is 2G, which is too high to protect the cluster from choking.

LOAD DATA command is one potential source for causing large transactions, and to support e.g. migrations to Galera Cluster use, we have developed a special method to split LOAD DATA transactions into small INSERT blocks. This was another attempt to protect clusters from potentially harmful large transactions. LOAD DATA splitting can be configured with wsrep_load_data_splitting variable.

Streaming Replication is the technology that finally solves the large transaction problem. In a nutshell, the architecture looks quite simple:

With this, secondary nodes do not get a single large transaction write set to digest, but they chew up the transaction with reasonable sized fragments. Each fragment is fast to apply, and will not block other transactions in the commit phase. The following images show how this happens. 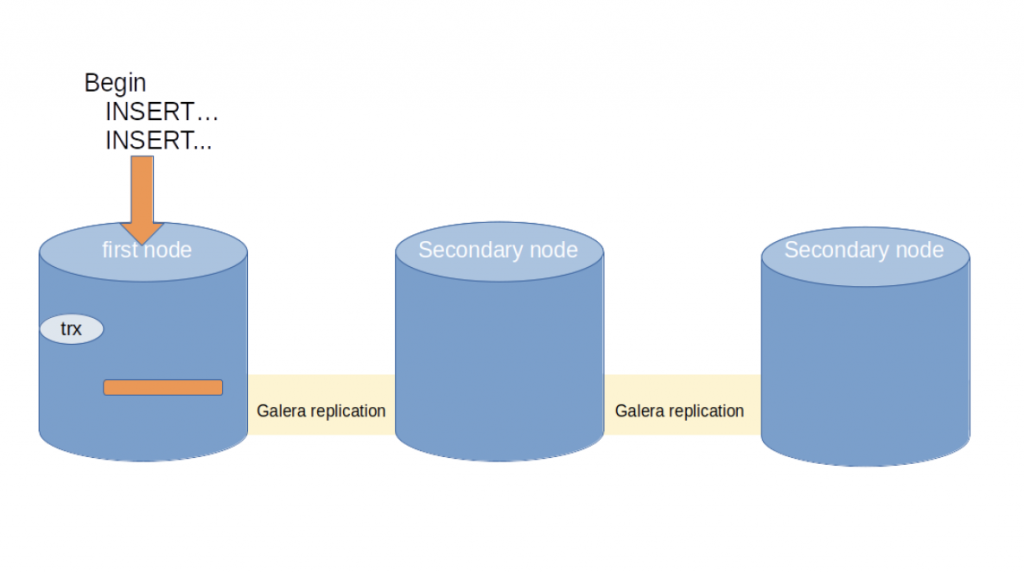 As soon as wsrep_trx_fragment_size is exceeded, a write set is composed of replication events accumulated for the fragment, and replicated to the cluster. The receiving nodes will launch a special streaming transaction transaction (“SR trx” in the image), which applies the events in the fragment transaction and remains alive in the node. 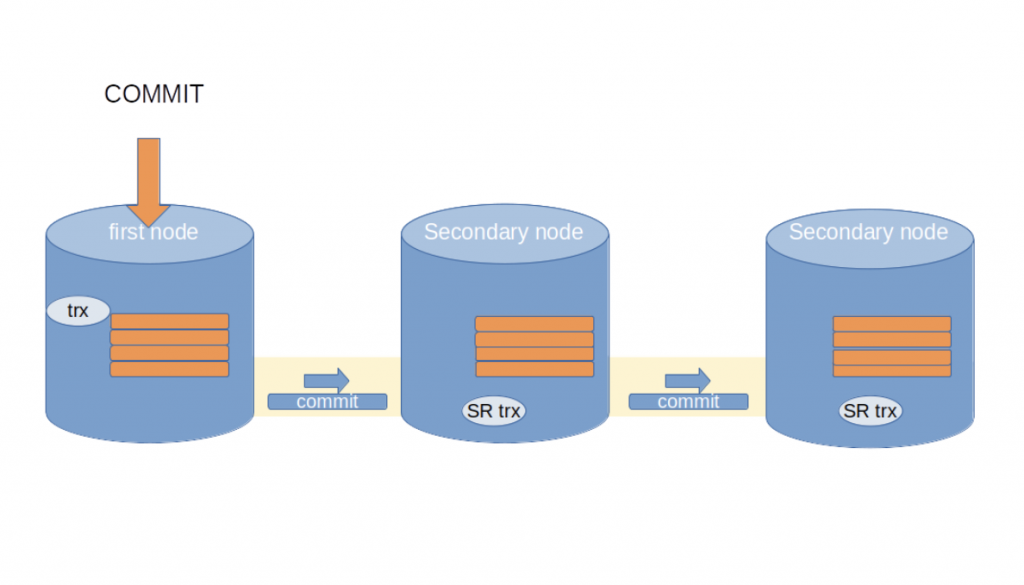 With this, the cluster has turned into a distributed transaction processing engine. The large translation is being processed in all cluster nodes at the same time. Secondary nodes follow the execution state of the first node practically one fragment size worth of replication events later.

We started the development of Streaming Replication with MySQL version 5.6 in 2015. The basic functionality for splitting transactions and applying by long term streaming replication handler transactions was rather straightforward to develop, but as usual, the devil lurks in the details. Synchronous database clusters may lose nodes and/or join new nodes at any time, and long term streaming replication transactions must be possible to bring back to life and catch up to the correct state in new joining nodes. This was probably the hardest development challenge to overcome.

In MySQL side, we merged all Galera 4 functionality to the 8.0 release series, which was released in 2020. MySQL 5.7 and earlier use Galera 3 and we have no plans for backporting Galera 4 to 5.7 version.

Configuring streaming replication is rather simple, we have only two configuration variables for tuning: 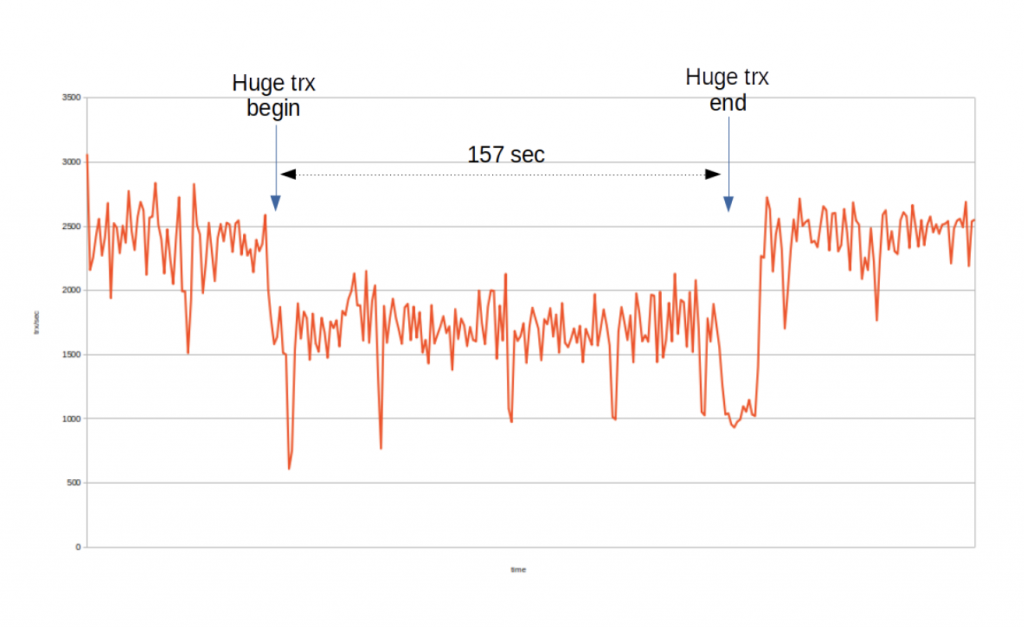 In this experiment, wsrep_trx_fragment_size is set to 10K. i.e. After the replication event set’s accumulated size exceeds 10,000 bytes, a new fragment write set is replicated.The “Huge trx begin” and “Huge trx end” marks show when the large transaction begins processing and commits in the first node. The total execution time is 157 secs, and there is no hanging at all.

During the large transaction execution time, the total transaction throughput lowers down to level of 1.7 K trx/sec.

In this experiment, wsrep_trx_fragment_size is set to 100K. i.e. after the replication event set’s accumulated size exceeds 100,000 bytes, a new fragment write set is replicated.The “Huge trx begin” and “Huge trx end” marks show when the large transaction begins processing and commits in the first node. The total execution time is 75 seconds, and there is no hanging at all. 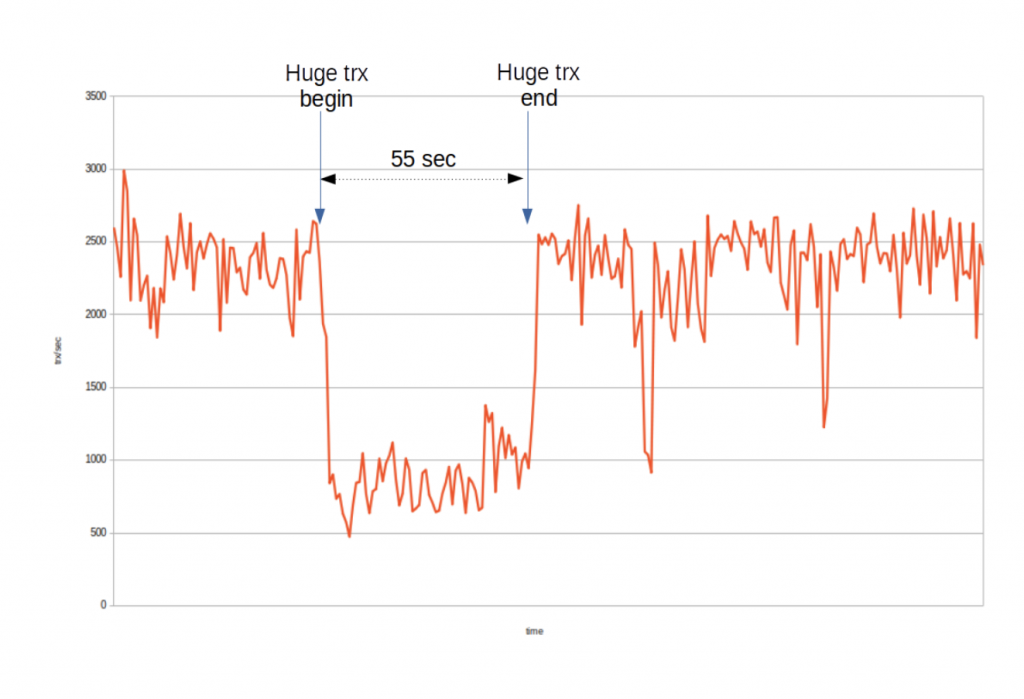 In this experiment, wsrep_trx_fragment_size is set to 1M. i.e. After the replication event set’s accumulated size exceeds 1,000,000 bytes, a new fragment write set is replicated.The “Huge trx begin” and “Huge trx end” marks show when the large transaction begins processing and commits in the first node. The total execution time is 55 seconds, and there is no hanging at all.

During the large transaction execution time, the total transaction throughput lowers down to level of 0.7K trx/sec. Total number of fragments replicated is now 188.

The first implementation of streaming replication is conservative and targets for correctness rather than for performance. As seen by the simulation, using small fragment sizes will easily multiply replication heavily. Also handling fragment metadata storage causes additional storage and CPU load for the cluster. If fragment size is configured so low, that regular sized transactions will be fragmented, that would cause considerable performance degradation for the cluster. Therefore our recommendation for streaming replication use case, is to split only harmfully large transactions from the cluster work load.  The fragmentation unit should be bytes and fragment size high enough to not split the regular well behaving payload transactions. The actual size depends on the cluster capacity and exact nature of the transaction load, but I would expect that fragmentation size limit in magnitudes of 10-50MB would be suitable for many use cases.

The max write set size variables are still enforced and can be used, but if streaming replication is configured, it does not make sense to use these limits any more.

LOAD DATA splitting is still enforced by wsrep_load_data_splitting configuration, but it is now implemented through streaming replication.

Streaming replication development was a big effort and it has turned out to be an effective method for protecting the cluster from harmfully large transactions. The stalling effect of large transactions is so serious that it is better to use this precaution. Or, if nothing else, at least to configure wsrep_max_ws_size low enough to abort transactions growing too big, the 2GB default is apparently too high.

Our current work in this area is focusing now on optimizing the streaming replication performance and experimenting with XA transaction use cases.

Galera Cluster for MySQL trainings in June: Beginners and Advanced

Galera Streaming Replication: Too Big A Bite Can Choke Your Cluster